Tapulanga for Sendong: The Story of Ampil (Part 2)

Tapulanga Foundation launched the Special Appeal for Sendong-Rebuilding Homes and Livelihood Assistance last January 2012.  This appeal aimed to raise funds for the victims of the typhoon.  We are sharing with you a report of the first beneficiary who was given support to make a living for himself and at the same time, rebuild his future.

The first part of the article showed Ampil's life before the faith-challenging event (see http://tapulanga.blogspot.com/2012/06/tapulanga-for-sendong-story-of-ampil.html).  In the second part we share how this event that changed his life forever.

Ampil was living a simple life with his family in Iligan City, located in the southern part of the Philippines.

In the morning of December 16, 2011, Ampil’s children were very much excited for the yearly Christmas party in their community.  His children, Ferlie and Galfer, Jr. were talking about Christmas gifts and songs that they were going to sing.  His wife, Julie, who was then the Purok Treasurer, had already collected the money intended for the said party. In the afternoon, the children enjoyed playing with their cousins. At 5 p.m., his kids happily welcomed him and beaming with smiles as he just bought a new dvd player.  Around 8 p.m., the family enjoyed testing their new player as they happily sang Christmas songs even without a microphone.  Galfer, Jr. enjoyed the most as he even refused to sleep until the family went to bed past 10 p.m. already.

At around midnight, Ampil’s family was awakened by a great pounding on their wall and someone yelling, “Wake up! The river has overflowed!”  The water was already up to their knees so they hurriedly went to his in-law’s house which was not far from theirs.  He even went back and tried to save whatever he could from the flood, moving up his appliances to higher areas in the house thinking that the flood would not be that strong.  Soon enough, he realized that it was futile.  He went back to his in-law’s place thinking that his whole family was still there.  He was told by his wife’s uncle and aunt that Julie (Ampil’s wife) and his daughter transferred to his cousin’s house nearby.

Finding their way in the dark with only a few people having flashlights was very difficult. With his son, they tried to follow the others but was unsuccessful because the water was already chest high and the current was very strong.  Voices of children and adults could be heard all around asking for help.  They sounded powerless over the monstrous water.  His 3 year old little boy was in his arms crying, when the water rose up to cover the roof where they had climbed up to.  While he struggled to keep himself alive for his son, the fear of losing him kept him strong and hopeful even as they were both swept into the open sea.  He had witnessed the voice of his son slowly fading away.  He did not lose his grip on his son even when the boy wasn’t talking to him anymore.  He was thinking, “Junior might be dead. Nevertheless, I will not give up on him.”  In the dark of the night, Ampil tried to resuscitate his son on top of a log.  Not long after, they were swept again by the raging water.  He lost his grip on his son’s lifeless body.  He tried to swim under the water and recover his son but to no avail.  Logs and other unknown debris hit him everywhere in his body and almost cost him his very own life.  His body was literally black and blue when he was rescued.

Losing everything that you have is painful but facing the reality of death of your whole family was just too much to bear.  There wasn’t a day in the months after that Ampil was not crying over the death of his family. He made every effort going from every morgue, hospital, and other places, in and outside of the city just to find the bodies of his wife, daughter and son.  To be the only one alive in his family left him so guilty of being alive and breathing.  There is no amount of words that we could utter to ease his pain but it is only through the grace of God that Ampil is now moving on with his life.

Ampil may not have fully accepted the fate of his family yet, but one thing is for sure, when he received the tools and equipment that Tapulanga Foundation gave him, a smile was brought to his face that his family has not seen after the tragedy. 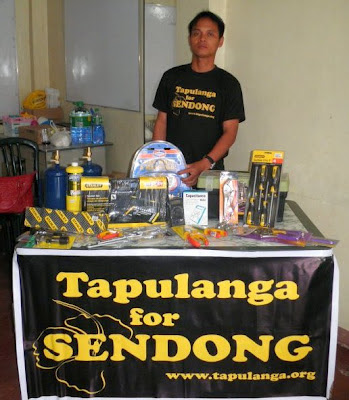 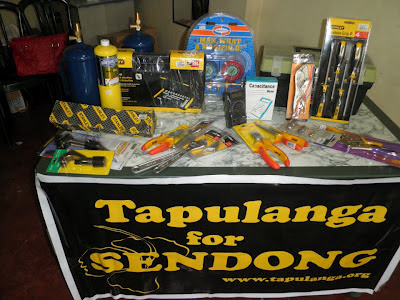 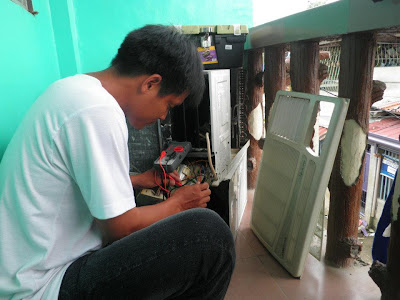 With the tools, he is now slowly regaining a happy disposition in life.  He has been accepting repair jobs to keep himself busy.  As of now he is still pre-occupied with the paper work for his family's death claims.  He dreams that once he has a stable job, he could save enough money to go abroad and become an overseas worker. He believes working abroad could somehow relieve his painful past and help rebuild his family's future (parents/siblings), for them to move on also.


To all the donors of the Special Appeal for Sendong-Rebuilding Homes and Livelihood Assistance, thank you so much for your generosity and prayers as well.
Posted by Micmic Golez at 9:29 AM