The World Through Nica's Eyes

Nica Galvez, barely five years old, sits in a class of thirteen students. It is another day at preschool. On her desk is a piece of paper. On the chalkboard the teacher writes a title and, like everybody else, Nica copies down the title on her paper.

Nica clearly remembers the story. It is one of the first stories anyone has heard of in their childhood: the story of creation. Her teacher tells them the story, bit by bit, every day – a tale of light and darkness, of flowers and butterflies and the mountains and the sea, of Adam and Eve. On days when the projector is available, they get to watch video clips about the story. They listened well to their teacher before, so they know exactly what’s going to happen: there will be light. Flowers will bloom, trees will grow. Adam is about to appear.

As the twenty-minute video played, Nica gushes softly with her classmates. Nica Galvez is often quiet in class. She’s shy, but with friends she speaks more. She’s not very different from other girls. She does, however, have a higher blinking rate than her fellow preschoolers in the room. But besides this, there’s nothing about Nica Galvez that betrays any hint of the catastrophe that could have permanently changed her life, and how she literally saw the world, two years ago.

This catastrophe involved the faint glint of a pair of scissors, a searing pain in her right eye, a cloudy vision, and the doctor’s advice that Nica needed eye surgery. All because of a squabble between Nica and her brother, one day in October 2011.

Four months later, Nica braved the operation. Soon, she finally, anxiously took the white bandage off her right eye. Once again, the world was clear and unspoiled, in her eyes, just as it had always been.

There are still moments when she gets cross-eyed. Close your eyes, her teacher would tell her, and when she opens them again, everything returns to normal.

Her right eye doesn’t hurt anymore, she says. Both her eyes are fine, her vision flawless. She blinks more than her friends do, that is all. And yet there’s nothing else about this young girl that betrays any hint of that two-year-old catastrophe. It seems it would have to take more than a silly little incident like a sibling fight and a pair of scissors to change how Nica literally saw the world.

But the memory of her eye injury, or of the operation, is the least of her thoughts right now. At the moment, Nica Galvez clearly remembers the story her teacher had showed them yesterday. She remembers light and darkness, the mountains and the sea. She thinks of butterflies, and of Adam and Eve.

Little Nica picks up her crayon, and she starts to draw. 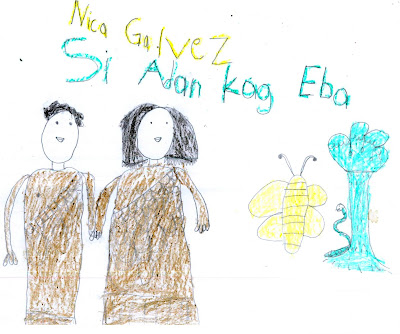 Posted by Micmic Golez at 9:34 AM No comments:

A Friendship Between Four Boys 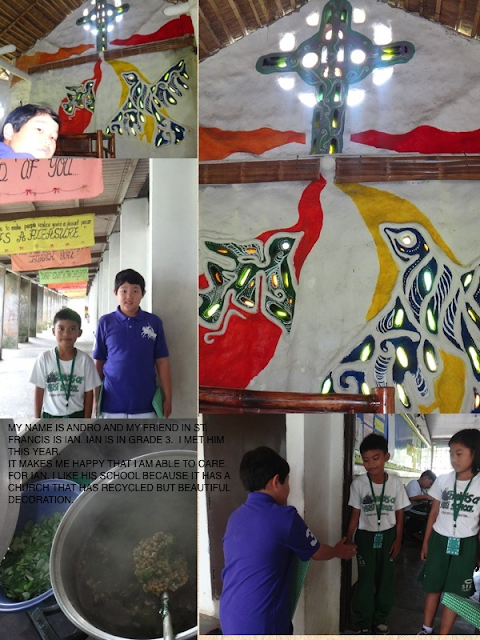 My name is Andro and my friend in St. Francis is Ian.  Ian is in Grade 3.  I met him this year.

It makes me happy that I am able to care for Ian.  I like his school because it has a beautiful church that has recycled but beautiful decoration. 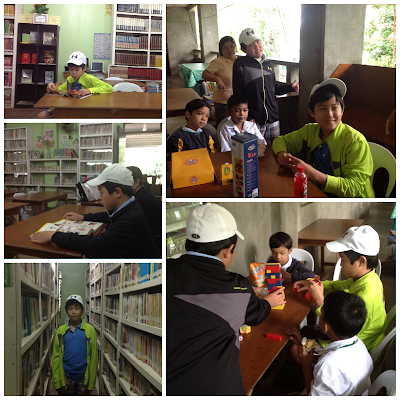 I met my friend Reign this year.  I was a bit shy.  But when we were playing the game I got him, we started to bond and we liked it.  I realized he was nice.

In our pictures that was taken on our 2nd day of visit, we enjoyed playing Jenga in the library.  The library may be small but it had lots of books and my brother Andro also enjoyed reading.  We think people should come visit St. Francis of Assisi School because it is very nice and the people, like the principal and Tita Mic, is also very nice.

Diego Barrientos, who is 11 years old, sponsors the lunch meal of TF scholar, Reign de la Cruz, who is in 4th grade.

The Barrientos family:  Felix, Reggie, Diego and Andro, visited the school last July 22, 2013 and met their scholars for the first time!  It was truly another blessing that they shared their time (and gifts) with the children as well!

Posted by Micmic Golez at 10:40 AM No comments: