Tapulanga for Sendong: The Story of Ampil (Part 1) 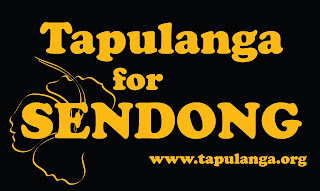 Tapulanga Foundation launched the Special Appeal for Sendong-Rebuilding Homes and Livelihood Assistance last January 2012.  This appeal aimed to raise funds for the victims of the typhoon.  We are sharing with you a report of the first beneficiary who was given support to make a living for himself and at the same time, rebuild his future.

This is an article in two parts.  The first part will show us the life of this man before the faith-challenging event occurred in his life.  The second part will describe how he went through this challenge and got through it at the end.

Part 1
This is a glimpse of the life of Ampil before Typhoon Sendong hit the place that he lived at the most joyous time of the year.  Iligan City, located in the southern of the Philippines, was submerged in water.  An alarming number of lives were lost, some of whose bodies were never recovered.

Galfer Hora Lasmarias, also known as “Ampil” is a 30 year old refrigeration and air-conditioning technician.  He got married to Julie Rina Kundiman 12 years ago (June 2000) when she was 29 years old.  They've been blessed with two beautiful children --- Ferlie, who had been 10 years old and in her 4th grade and Galfer Jr. who had been 3 years old.  They enjoyed living a simple life in their own house situated in Bayug, a small island within the vicinity of Iligan City.

Coming from a close-knit family brood of 13, Ampil valued his family more than anything else.  He knew how to persevere in times of great need.  Being the breadwinner, he was a hardworking father, devoting all his time to his dear family and to his work.  He earned a meager salary of P6,000 a month.  To sustain his family, he made sure to do extra work or “sideline” even if it meant doing it on Saturdays and Sundays, repairing broken refrigerators and airconditioning units which gave him an extra income of P4,000 to P5,000 a month depending on his clients’ generosity.

Everything had been going well for him, it seemed.  He was already contented with what he had: a loving and supportive wife, two precious kids, a roof over their heads, and a steady income enough for them to live a decent life. But everything in his world turned upside down in the early morning of December 17, 2011 when Typhoon Sendong hit the city, flooding the whole island where they lived.

In the morning of December 16, the day before the devastating event changed the course of his life, his children were very  excited about the upcoming yearly Christmas Party in their community.  Ferlie and Galfer Jr. were talking about Christmas gifts and songs that they were going to sing.  Julie, who was then the Purok Treasurer, had already collected the money intended for the party.  Nothing unusual happened that day.  In the afternoon, the children enjoyed playing with their cousins.  At about 5 pm, his kids happily welcomed him and beamed with smiles because  he just bought a new “DVD Player,” which they could use to practice singing their Christmas songs.  At 5:30 pm, Galfer started waxing the floor of their house.  At around 8 pm, the family enjoyed testing their new player. They were happily singing Christmas songs without a microphone.  Galfer Jr. must have enjoyed the most because he refused to sleep at around 10 pm. He wanted to watch more of the background scenes in the songs.  Eventually, the family retired to sleep at past 10 pm.
Posted by Micmic Golez at 7:00 PM