We salute Efren Peñaflorida for winning CNN's Hero of the Year award for starting a “pushcart classroom” in the Philippines to bring education to poor children as an alternative to gang membership. As a child, Peñaflorida picked school over gang life in Cavite City and vowed to create a way for other children to make the same choice. He created a program that brings books to children in slums and on the streets, and the 10,000 members of his Dynamic Teen Co. have brought reading, writing and hygiene to 1,500 youngsters.


“Our planet is filled with heroes, young and old, rich and poor, man, woman of different colors, shapes and sizes. We are one great tapestry,” Peñaflorida, now a 28-year-old college graduate, said upon accepting the honor.

“Each person has a hidden hero within, you just have to look inside you and search it in your heart, and be the hero to the next one in need,” he said.

“So to each and every person inside in this theater and for those who are watching at home, the hero in you is waiting to be unleashed. Serve, serve well, serve others above yourself and be happy to serve. As I always tell my co-volunteers … you are the change that you dream as I am the change that I dream and collectively we are the change that this world needs to be.”

Posted by Robin Abello at 8:23 AM No comments: 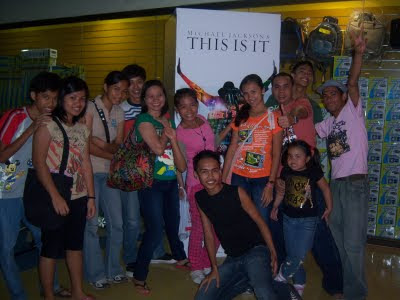 Last November 3, 2009, selected student-scholars with a few teachers watched Michael Jackson's "This Is It" movie at Robinson's Movieworld, Bacolod City. Thanks to the Tapulanga Foundation for this opportunity!

It was unbelievably artistic! by Stephanie Diaz, 2nd year

It was very amazing and I liked the songs and dances. His movie is unforgettable and very inspiring. by Lovelyn Villanueva, 4th year

It was a FANTASTIC performance ... seeing my idol perform again! Go MJ! TRULY you are a legend in the music industry! by Sir Ariel Gabino, teacher

Posted by Micmic Golez at 11:49 AM No comments: 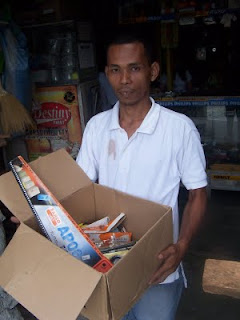 Tapulanga Foundation funds for typhoon Ondoy went to the relatives of Sandra Garay, our office assistant at Bonfire Production. They were a total of five families.

It’s been almost a month since the typhoon. They’re rebuilding their houses. But basically still had nothing. Amon was the representative who went with us when we bought their basic needs. Since he is a carpenter, he chose his tools, e.g. saws, a metric tape, hammers and other carpentry tools that he’ll share with his brother who’s also a carpenter. He looked pretty happy that he can do his job again using his own tools. 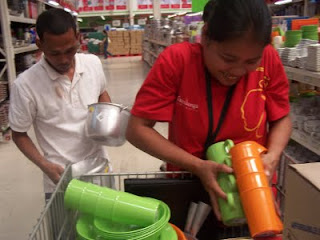 I saw Amon holding a list as well so I asked if I could see it. Using a piece of torn paper and pencil he wrote: kawali, gas stove, plato, baso-tasa, kutsara, kaldero, sandok, dura box, tuwalya, damit, kumot, termos, kutson, kasirola, mangkok (bowl). Then he asked if they can have electric fans for the children. Plenty of mosquitoes there, he said. Even if they don’t have electricity yet, he’s hoping that it’ll get fixed soon. He chose plastic plates, cups and bowls.

Aside from his list, we added rice and toiletries. 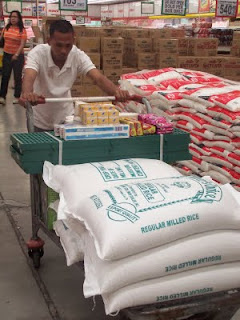 Instead of buying mattresses which were expensive, Sandra suggested that they buy foam from a factory and make their own mattresses. They can sew the cover themselves. Instead of a plastic cabinet (dura box, according to his list), Tara suggested that they buy plywood and make their own cabinets. After all, he has tools now! He smiled when we said that.

When we got to Provident Village, people were still cleaning and washing not only their homes but also the streets. There was still mud everywhere. There were MMDA bulldozers and pink-clad MMDA guys. The mud covered entire houses. And there was a dog on top of a roof, probably still traumatized. When we got off the van, we noticed a stench, a weird smell that’s like a mixture of dirty water and trash. It’s been almost a month but the smell is still there. Sandra showed us where she used to live. In the middle stood a little wooden house that Amon has been building since he and his family came back. It’s made of various types of wood and other stuff he could find. Inside the room is a wooden plank that serves as his family’s bed. On top of it was a mineral water container. That was it. It was bare. 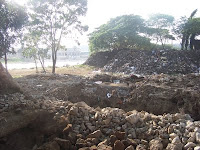 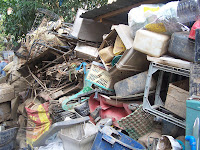 On the day typhoon Ondoy hit Metro Manila, these families thought it was just the usual flood. They’re used to knee- or waist-level flood that subsides after a couple of hours. But this time, it’s different. In a matter of hours, the water rose much higher than ever before. They didn’t want to leave their homes. But it became clear to them that they had no choice. Only the men know how to swim. But on that day, you had no choice but to sink or swim—literally. They couldn’t remember how they were able to go up the roof. But living in single-level, small, wooden houses, their roofs were too low for the flood. In panic, they held on to ropes and used styrofoam to stay afloat. Slowly—although they couldn’t remember how they did it—they reached the roof of their rich neighbor. There were about fifty of them on that roof. Just a few meters behind them was the dike and in the middle of the night, they heard a loud rumbling. The dike couldn’t hold the water. The water overflowed and destroyed the dike. They heard people calling for help. It was dark. They were wet and hungry. They didn’t know what would happen to them. That was their situation for two days. They took anything edible from what floated on the water. They even got some chocolates which they said must have come from their rich neighbors. They saw everything float--furniture, appliances and cars. And they saw floating bodies. They stayed on that roof till the flood was low enough. Old women and men were saved by a chopper while the rest of them walked. There was no transportation. There were trash and debris all over. Sandra’s relatives walked from Marikina to Project 4. Eleven of them stayed at Sandra’s house for two weeks. When they came back to their houses, these were empty except for mud. Sandra’s old house, however, was no longer there. It got completely destroyed by the flood. No wall, no gate, nothing. What was left was one toilet bowl and some of their plants. Amon found his bike and small refrigerator among the debris. None of his or his family’s other belongings was found. 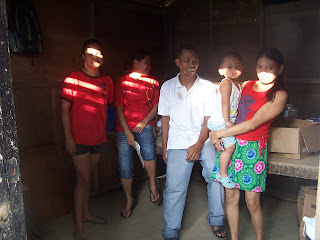 They’re all very grateful to Tapulanga Foundation for the big help. They’re starting their lives from nothing and it makes a difference to feel that there are people who reach out to them. - by Fiona Borres - Partner, Bonfire Productions, Inc.
Posted by Micmic Golez at 8:15 PM No comments:

This is it! 100% of the proceeds to benefit the Typhoon Ondoy victims and the Tapulanga Foundation scholars. That means every peso made will be donated. It's definitely shopping for a cause.

Thanks to Joy Barreiro and Anne del Rosario for organizing this! 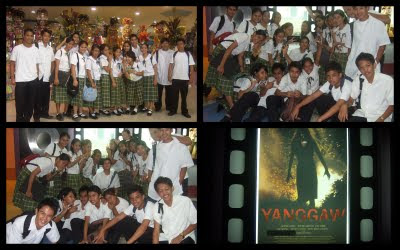 Yanggaw, an independent film of Cinema One, was watched by the fourth year class last October 21, 2009 with their adviser Mrs. Lina Gabino at Robinson, Bacolod City. Thanks to the Tapulanga Foundation who sponsored this activity.

Yanggaw (an Ilonggo word which means "infected") is a drama-mystery movie directed and wriiten by an Illonggo, Richard Somes. It is a story of an "ordinary family that has to deal with their extraordinarily dark secrets that will change their lives forever."

Posted by Micmic Golez at 10:55 AM No comments: