Eight months have passed when Typhoon Sendong devastated the city of Iligan and claimed so many lives. This is the story of a family who lost not just their house and their source of livelihood but also family members whose bodies remain unrecovered until this very day. 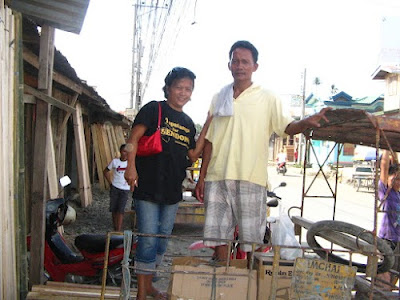 Eddie and Excelenia have seven children and all of them lived in Purok #5, Bayug, Iligan City.  Their eldest daughter, Edeline, who was married to Mc Jayson Ferolino for nine years and blessed with two sons, Mc Jayssin who was 9 years and Mc Jayvance who was 6, was five months pregnant when the tragedy transpired.

This is their account. On the night of December 16, 2011, it started to rain. They thought of it as the usual rain that will just stop in a couple of hours so the family retired to sleep past 9:00 p.m.  Around midnight, Edeline and Mc Jayson were awakened by a strong banging on the door (by their parents), alarming them to evacuate as the water in the nearby river overflowed. The grandparents, together with Edeline's family, their other children and grandchildren, evacuated to higher ground unprepared. Having no flashlights or any flotation device, they were just dependent on each other as the water rose up from their knees to their chest. The strong water current sent some members of the family to other directions. Eight of them found themselves on the roof of a relative's house.

When the house started to collapse, the entire family managed to climb on a coconut tree beside the house while the others held on to a mango tree.  But even the coconut tree was unable to stand the raging waters. The consequent downfall of the tree sent the family in disarray. They were all scattered, each trying to survive. The matriarch, Excelenia, lost her grip on the coconut. She was the first one who fell off the tree together with her other grandchild who managed to cling to her even underwater. Knowing that she can't swim, her husband Eddie swam after her, not knowing if he could still find her in the dark. It was pitch black but he was able to grasp his wife's foot and was very thankful that along with his wife was their 3-year-old grandchild, John Dave, still holding on to her grandmother's leg.

There was a lot of screaming and crying everywhere – asking for help. The pregnant Edeline was thrown into a pile of logs. Somewhere in the darkness, she can hear one of her child screaming for help, calling her. She was repeatedly hit by "so many debris" as she recalled, mostly branches of trees and even logs. That was the last memory of her dear family as she lost consciousness. It was already morning when she regained consciousness. A neighbor found her and helped her. Two of the children of Excelenia and Eddie were swept by the current to other barangays. They were only reunited in the evacuation center days after. She lost one of her grandchild from her other daughter, Sarah.  Edeline, unfortunately, lost everyone in her family, her two kids and her husband.  Just like what happened to "Ampil" who is her uncle, Edeline, also sank into depression, refusing to eat for months and tried to bury her agony by sleeping. Worried of her daughter and her unborn child, Excelenia and Eddie tried their very best to lift up Edeline's spirit in the midst of very uncomfortable living conditions in the evacuation center for several months as they are awaiting still for their permanent relocation.

Last April 27 of this year, despite all odds, Edeline Lacuna Ferolino gave birth to a 6.14 pounds bouncing baby boy named Mc Jayson Jr., after the name of her late husband. It was an agonizing normal delivery that almost caused Edeline her life. Her blood pressure rose up while she was in labor and the baby was actually overdue so she had to be induced. Thinking of their financial constraints, she strived so hard for a normal delivery still.  The sight of her son, the only tangible reminder of her spouse made everything bearable now for Edeline. Just last month, July 1, Mc Jayson Jr. was baptized in the Catholic rites attended by family members, one of which was Galfer "Ampil" Lasmarias who stood as one of the godfathers and is also one of Tapulanga Foundation's beneficiaries. 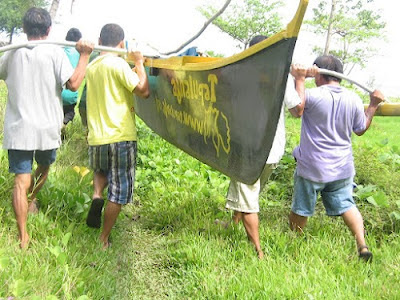 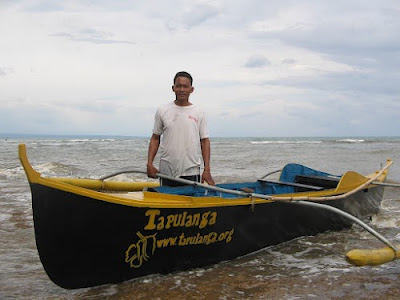 Excelenia, Eddie, Edeline and the rest of the family are so grateful for all of the help that the Tapulanga  Foundation has readily extended to them through all the foundation's benefactors. Having received a motorized "pump boat" is like giving them another chance in life. As a fisherman, Manong Eddie's simple dream is to be able to feed his family with his own hands without asking financial assistance from others. Now that he has the fishing boat and fishing net which he made himself, they can now get back on their feet. Also, the financial aid given for  Edeline's delivery is something that she can never forget for the rest of her life.

Thank you very much to you all!  God bless you all dearly!