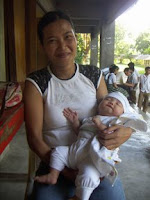 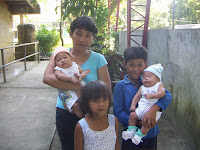 The Foundation welcomes 3 new babies to our Infant Feeding Program!

Right photo: Meet the Tagsip family! Maria has 5 children, the last of whom are TWINS William and Willy! They were born on November 20, 2007. The father is a worker in our hacienda but only during milling season (September - March). The rest of the year, he has no work! I really cannot imagine how he can feed his "big" family with only 7 months of work. When I met them, Maria's son was helping her take care of one of the twins!

Mrs. Virgie Ledesma, program director, recommended the twins to the program because she learned that the mother, due to lack of breast milk, was feeding her boys evaporated milk (liquid) mixed in water - to save on cost of milk. It was obvious when I met the boys that they were underfed because at 4 months old, they were "small."
Posted by Micmic Golez at 11:54 AM